Kenny’s Lakes Area Auto Experts is now part of The Detroit Garage Auto Family. You are being redirected.

Changing your timing belt is NOT optional – but waiting until it breaks to address any issues is. And that is a risk you shouldn’t take.

Most manufacturers recommend changing the timing belt at a specific mileage, usually between 90 and 105 thousand miles. But you should NOT wait until the last possible minute to have your timing belt replaced. Replacing it early can save you thousands of dollars.

If your vehicle is due for a timing belt replacement, or to find out what your manufacturer recommends, call our experts at (248) 668-1200. 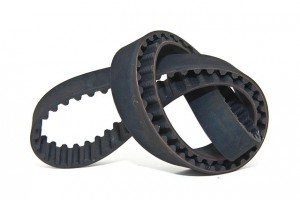 With the timing belt, it’s not if it will fail – it’s WHEN. This rubber belt is critical to your vehicle’s performance – and the operation of the auto engine.

The timing belt is a rubber belt with teeth, which travels on pulleys through the engine in your vehicle. The teeth on the belt catch on gears, like on the water pump to regulate the coolant entering the engine.

There are two common reasons that your timing belt would fail:

If your vehicle has an interference engine, a broken timing belt could mean thousands of dollars in damage. (The average cost to replace an engine after a blown timing belt can run from $3,000 to $10,000 and higher depending on the vehicle.)

In interference engines, pistons (the large cylinders in the illustration below) move up and down. Above these pistons, there are smaller valves that simultaneously pump up and down. The timing belt controls the operation of both these elements, ensuring that they move in sync so the valves and pistons never meet. 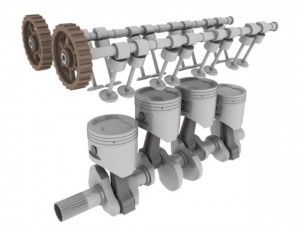 When the timing belt slips or breaks in an interference engine, the pistons and valves become out of sync – the pistons continue to pump, forcefully hitting (and almost always breaking) the valves.

Even in non-interference engines, a broken timing belt can immediately shut off your vehicles engine, leaving you and your family stranded on the side of the road with a vehicle that can no longer run. By putting off timing belt replacement to save some money now, you’re risking the safety of your family and vehicle – and risking extensive damage that will cost much more.

In this video, the Monday Morning Mechanic reviews the importance of Changing your timing belt EARLY to save BIG BUCKS!

“Changing your timing belt isn’t optional, but waiting until it breaks before you do can cost you thousands. While you’re having it changed, though, you can have several other items addressed at the same time, which can save you a ton of money for labor. While your shop is under the hood replacing the timing belt, have them change the water pump, and the tensioners, and you’ll save a lot in the long run.”

If your vehicle is due for a timing belt replacement, don’t delay! Give our auto repair experts a call at (248) 668-1200 to schedule your service, replace your timing belt, and save yourself from the danger and inconvenience of extensive damage and costly repairs.

We are open and clean!

We want to communicate the precautions we are taking to protect our valuable clients and our staff, including sanitizing our waiting areas, restrooms, counters, keys, and vehicles as our technicians exit them. We are committed to take extra precautions and do everything imaginable to protect you, our team, and to sustain the trust you have placed in us.

Additionally, we want to remind you of the number of ways we can maintain your vehicles with little or no direct human contact, including but not limited to key drop off, payment by phone, and coordinating vehicle pick-ups. Please call us at 248-668-1200 to find out about other ways we can help.

We will continue to closely monitor any additional recommendations from the CDC and our local government, thankful we are considered “essential services” to remain open to care for our customers.

Each and every one of us is deeply grateful for the chance to continue to earn and keep your trust and loyalty, and thankful that you have chosen our family to take care of yours.